My name is Sara Crockett. I have lived in Graz, Austria since 2004 and am originally from the United States. In the U.S., I earned bachelor's and master's degrees in botany (B.S., M.S.) and molecular biology and biochemistry (B.S.), as well as a Ph.D. in pharmacognosy. I came to Europe for love after marrying a man from Germany.

When I first came to Austria in 2004, my life was suddenly very different: I had no family, no friends to support me...no money of my own, no job, and I couldn't speak German. I was lucky enough to get a postdoctoral position at the university in natural products chemistry later that year. There I slowly built up a circle of friends and improved my language skills. But then in 2012, the position was gone...1 ½ years of unemployment and more than 150 applications later, I decided to start my own business. In 2013, I started a small business (Sara's Scientific Translations, www.saras-science.com) and currently offer workshops, proofreading, editing (academic English) and translations from German to English. But these last years have been an uphill struggle that have left scars. Again and again, I encounter situations or people who see me only as a 'foreigner', and it is as if I am thrown back to the starting position.

Through my work, I met the team at InterACT and was excited when I learned about the FemTalks Forum. I loved the idea of being able to participate in a Forum Theatre workshop, as well as getting personalized support in the mentoring circle! Since 2007, I have volunteered my time in several associations, especially the 'International Women's Association of Graz' (www.iwagraz.org). I have seen how difficult arriving and 'integrating' can be for people from other countries in Austria… especially for the women who often come here because of their husbands. I also found the idea of learning more about digital storytelling fascinating! I am very happy that I could participate in the FemTalks Forum project, because it gave me more motivation, strength, and a chance to meet new girlfriends! 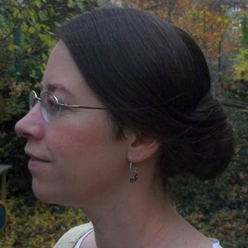